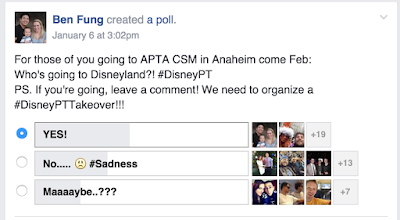 There will be at least 30 of your colleagues & their families, romping around at the Happiest Place On Earth!

Can both be done?! Well... I'll let you decide ;) This post isn't about finding or making the time. This post is all about what you can do while you're at Disneyland and some tips from a seasoned Disneyland Annual Passholder in how you can maximize your Disney experience at the parks. After all, if you've decided to go... you already know that it is worth it. And, if you are wavering, maybe this post will show you what 30+ people already know... it is worth it ;)

LOL. Who are we kidding? Of course I'm trying to get you to go!

I probably don't even need to say it, you probably already know: I'm a Disney FIEND. I love all things Disney & Star Wars; therefore, Disneyland (and Disney California Adventure) is just plain awesome. The fact that CSM is but and only next door to the Disneyland Resort, I can only hope that more and more of you will be helping me do a #DisneyPT TAKEOVER!

Considering that most of the CSM activities will be ceasing around 5 or 6pm -- AND -- that Disneyland is open until midnight for both the Friday & Saturday... there should be plenty of opportunities to get into the parks.


Here's what's up!
The Disneyland Resort is undergoing all sorts of changes in preparation for Star Wars land. What this means is that the train will be down and much of that same area surrounding the transition between Frontierland and Fantasyland. The good news is that because there is a bit less to do there, you don't have to feel paralyzed by too many options and trying to fit everything in. You'll have your option of park hoppers and various ticket prices to reflect how many days you wish to get in.

If anything, I'm hoping to organize an unofficial PT takeover... but, more news on that later.

If you haven't been to Disneyland in the last couple years... or decade. This is what you stand to gain!