First, I want to thank all of you who generously gave out your love, prayers, support, thoughts, and positive vibes last week when my 8-month-old baby boy, Nathan -- was rushed off to the "emergency room" (officially known as the Emergency Department) at Children's Hospital last Monday.

With much gratitude, Nathan is now well. His lungs are clear, he barely has a cough, he's crawling all over the place, and proceeding to pull to stand (and tumbling, once he tries to copy his 13-month-old cousin who has been walking since 10 months).

I posted a little while back that being vulnerable may hold the key to finding strength. As an exercise to this principle, I'd like share this nightmare experience which culminated to us going to the "ER." Also, as an encouragement, if not empowerment, to new parents alike: I hope you find this post as affirmation that no one knows your baby better than you. If your parental instincts raise a red flag, trust it -- you're probably right.

My Son's Emergency "Room" Experience
Two Thursdays ago, my beautiful and most attentive wife - and - mother to our son, noticed that Nathan was developing the slightest hint of a wet cough. For the moment, it didn't seem to be of any concern. However, as the cough developed into cold symptoms, Nathan started breathing faster and being less and less active. Eventually, things got bad enough that I called into the nursing/physician hotline just to get an objective viewpoint.

Sure enough, the worry I developed as a dad was confirmed by best practice guidelines. Nathan's respiratory rate was holding at the high 50's and low 60's. Every once in a while, it'd spike up to the high 60's. He was working hard & became quite apathetic -- really, he didn't want to do anything. This was unlike him since he just started to crawl and pull to stand. His normal self is quite explorative; he typically loves to play with anything he can get his hands on or himself into.

Sunday night, we finally took him into urgent care where a breathing treatment and steroids were administered. It seemed to help. His oxygen saturation improved, and, for the night, it would prove his breathing was better. Monday, we followed up with our pediatrician and everything checked out fine. Unfortunately, one of the signs we were told meant time to go to the hospital presented itself again; respiratory rate greater than 60 breaths per minute.

Around 8PM on Monday, Nathan started holding his breath in a way we never saw before. It was terrifying. Honestly, I didn't know where to begin. Listening to his lungs again got me all in a panic as all those nasty sounds came back, previously banished at urgent care the night before. Ultimately, he calmed down but still was working so very hard to breathe. As parents, we couldn't take it anymore and knew we wouldn't sleep a wink if someone didn't check him out. To the emergency department we went.

Nathan was diagnosed with RSV / Bronchiolitis. His treatment was some pretty crazy suctioning by the respiratory therapist. The respiratory therapist was able to get out around, if not a bit more than, 100 cc's of gunk plus saline, both from the sinuses and from the bronchi. Really, the poor baby just couldn't get the mucus out himself -- it clogged everything so badly that it effected his breathing in quite a scary way.

It's been a week now, and, thanks be... our baby is back to his normal self. Lung sounds are normal, breath rate is healthy, appetite is back, and he's playful, explorative, and wishing he could walk already. Taking him to the "ER" was the best decision we could have made; it gave us the peace we needed and the treatment Nathan needed. A big shout-out goes to the very skilled & compassionate clinicians at Children's who took care of both Nathan and his worried parents. And, another very warm and grateful thanks to all of you... family and friends, supporting us when we needed it most.

Life is quite the journey. Thank you for sharing it with me. 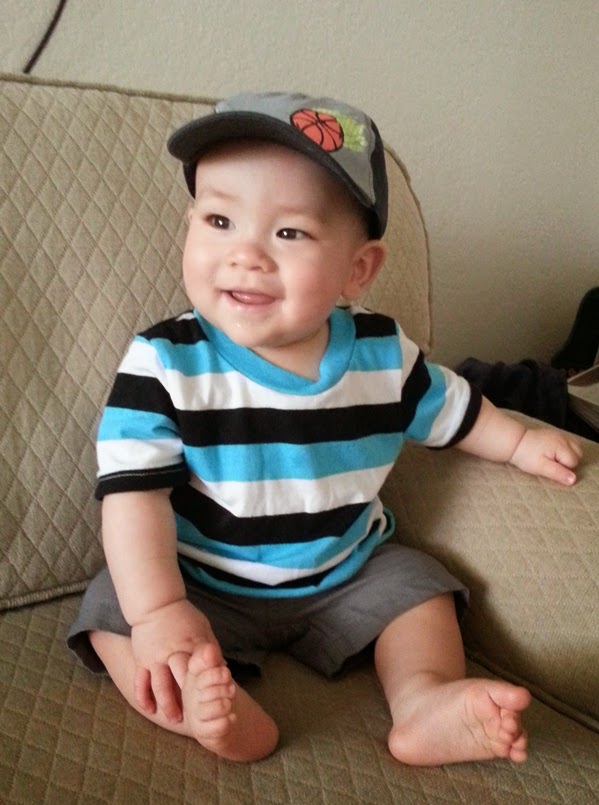