Case #1: Vertigo... or something more?
With vertigo, what do we typically run to? All your BPPV tools, right? If you ran through all these tests, performed the head thrust, oculomotor assessments, screened out for VBI... all these tests would have given the same result: nystagmus that lasted for minutes at a time, with and without torsional components. And, sure, the patient was complaining of vertigo the entire time as well. What should catch the clinician's eye immediately was the picture I posted in Part 1: Horner's syndrome.

While we're not tapeworms and therefore have given norms for amounts of asymmetry, the clinical eye should widen a bit when a history of CVA is combined with a fall plus vertigo. Now while the patient's Horner's syndrome was not as pronounced as the picture posted, it was definitely present enough for the nurse, the wife, and myself to raise suspicion. Coordination, as would be suspected, was absolutely terrible. Strength was bilaterally strong. Stance, balance, and attempts at ambulation were nothing short of terrifying - the patient simply did not have control over his movements. Did he go home? NO WAY. In fact, I held discharge and insisted on another MRI. In the end, this patient went to the acute rehab unit for several weeks. 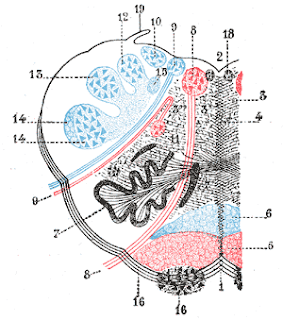 Diagnosis: PICA syndrome. What was neat (for me) about this case was that I called out a posterior cerebellar stroke prior to seeing any imaging. What was a bit ironic is that the repeat MRI was practically identical to the admitting MRI. In fact, later in the day (after my evaluation) when the MRI became available, I pointed out the area in question to the nurse who was then quite convinced of my assessment. Oh, yes! Most importantly, the patient even said that all this felt like a stroke - just a "different" type of stroke. Lessons: listen to your patient, always make your own calls, if it smells/feels/looks/acts like a duck - it IS!

Case #2: Acute Low Back Pain with Suspicious Hip Range of Motion
The event: Sign of the buttock. While not following the classical criteria, it should pique some curiosity when anything close to the sign of the buttock presents itself. I made the attending physician aware of the constellation of symptoms and signs that I found, expressing concerns that an x-ray was likely not thorough enough to uncover the physiological root cause of this patients range of complaints. An MRI was ordered. Most unfortunately, the radiologist reported that metastatic cancer had developed throughout the patient's pelvic and lumbar region, quickly spreading into the the thoracic spine. In fact, there were several small compression fractures that had developed due to the cancer. Direct access isn't just about improving the welfare of society by freeing up economic markets; for the healthcare provider, it also means keeping an eye out for the rare but tragic and sinister health events - hopefully, there are times when we can catch it early enough and save lives.

Ok. Back to the cases!


3. Physical Therapy Treatment: Total Knee Replacement, Post-Op-Day #2 (POD #2)
A man in his early 70's is on POD#2 of his second knee replacement (on the contralateral side of the first). His first knee replacement was only a couple years ago and was met with sterling success. However, these past few days were met with frustrations of orthostatic hypotension, slightly more swelling at the knee than expected (but within acceptable norms), and a copious amount of pain at the surgical site which was far more threatening to the patient's consciousness than was his first knee replacement. On POD#2, PM treatment, the patient began having difficulty with exertion. In-room-ambulation was fairly easy at supervision with a walker POD#1 PM and POD#2 AM. Although blood pressure was stable, the patient's heart rate was significantly elevated; respiratory rate was also elevated with a slight decrease in oxygen saturation. The nurse and the telemetry technician noted that other than the elevated heart rate, the heart did not seem to be displaying any abnormal signals.

The orthopedic surgeon is now frustrated, concerned, and is asking you - the physical therapist - what do you think is going on. What do you tell him? (Please, don't say, "You're the doctor... you tell me!" That's an automatic FAIL if you rotate with me).

4. Physical Therapy Treatment: Total Hip Replacement, POD#3 AM
A very strong, former high-level-athlete is receiving his first total hip replacement. He is in his early 60's and has been demonstrating the most impressive physical feats post-op. However, he keeps coming across this strange "wall" of fatigue and exhaustion approximately 15 minutes after he completes gait training. His orthostatic vitals demonstrated within normal limits throughout his stay. However, he is becoming increasingly anxious regarding this sudden fatigue that washes over him while he rests in his bedside chair, after he completes his ambulation. In fact, one episode performed with nursing got so bad that the patient was forced to lay back down in bed. He expressed after the episode that he felt like he was going to pass out. When the nurses checked his vitals, there were all normal.

What do you want to check? Do you wish to order any diagnostics if you were the provider? What do you think is going on?

5. Physical Therapy Evaluation: Status-Post-Fall
A severely kyphotic and osteoporotic woman in her late 80's is admitted to the hospital's short stay observation unit due to a possible syncopal episode resulting in a fall. The physicians have ruled out any cardiac factors and are now suspecting a mechanical fall in the patient's bathroom. Per usual practice, a physical therapist was consulted to further evaluate the situation and rule out any neuromusculoskeletal contributive factors. The evaluation revealed nothing out of the ordinary - not even orthostatic hypotention.

However, when cervical range of motion was screened, the patient complained of some neck pain and a small amount of dizziness. Due to the woman's slightly impaired memory, she is unable to give you a definitive history of the fall. She did mention that in the past, she was treated by a physical therapist for vertigo.

What is your most acute concern at this point? How do you confirm this suspicion? What special test/imaging/diagnostic test would you order if you were the provider?

The results of these cases and more cases to come on Part 3 of Acute Care: Preparing Students for Direct Access!
Posted by Dr. Ben Fung at 10:17 AM